Costs of Owning a Car in Croatia

I spent most of my adult life so far avoiding driving. While I did get a driving license at some point, the idea of needing to buy, own, and maintain a car seemed like the complete opposite of the minimalism I was trying to achieve in my life, so I skimped on it for as much as I could. I kept that low-possession college mindset even in my working years, and the car was the best symbol of a big, expensive, and high-maintenance thing that will hinder you from other things you should or want to do in your life.

But two years ago, I caved in. It was a combination of factors - I moved cities where the public transport was not as extensive, plus Covid had just started and there were curfews and travel restrictions, so when you see how quickly things can go south, it makes you look for more self-reliant solutions. And driving being such an essential skill today, it was as good a time as any to start working on it.

Since then, one question has remained for the whole time - how much time and money is this actually costing me? For that, I've kept track of every expense for the car over the last two years, and here are the results.

Now, spending more than a third of the car's worth in a year does sound pretty worrisome. A big factor in that was that it was a first year, which incurs some extra costs - initial registration costs more, you need to buy a separate set of winter tires, plus there were some repairs that had to be done.

But overall this amount is pretty shocking now that I see it. I drove 6700 km, which is some 3000 km less than the country average, spending 523 liters of fuel (with an averaged cost of $1.44 per liter during the year). Total consumption turns out to be 7.7 liters per 100 km, which also sounds a bit higher than it should be. The car's specs say it should be only 6.1 liters, but as I'm not using the car daily for going to work, the majority of the kilometers, 66%, were done on out-of-city roads and highways, where the consumption ramps up quickly.

When we put it in context of what it's like in Croatia, where the average salary is $1100, it turns out the average human here has to spend two months of the year working just to pay off all the car's costs.

Here's the distribution of all the costs: 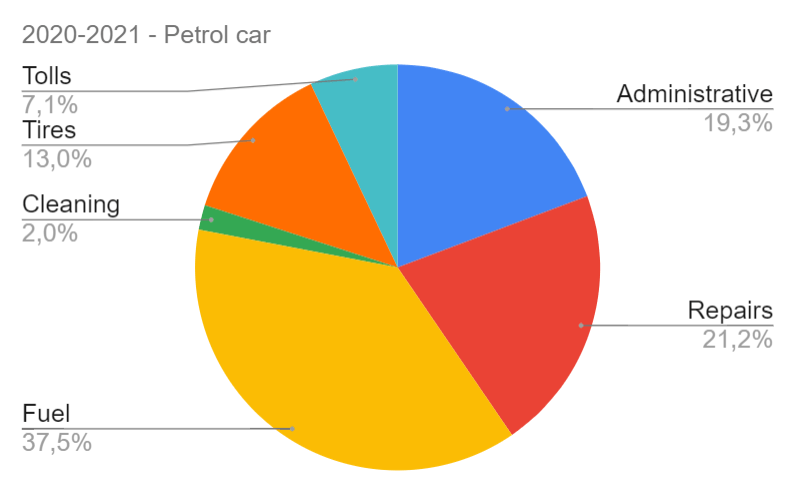 As expected, fuel takes the biggest piece of the pie, 37% of it.

There's one question here - if the car was electric, how much would we save? Some of the best-buy electric vehicles right now (I took a look at Hyundai Ionic 5 and Kia EV6) use around 140 Wh per kilometer. In our case, that would be 938 kWh of energy for the entire year, which in Croatia would cost around $121, which is $620 less than what we had with petrol, a whooping six-fold reduction that brings the total car costs down by 30%, getting it to $1380: 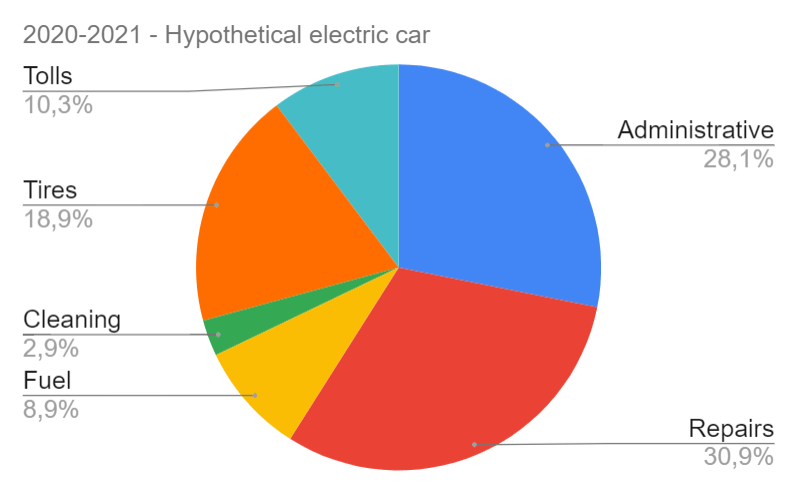 In that case, the total cost for a year would be $1370, which would be around 30% less just based on the fuel reductions alone. It would probably go even lower, as I spent $250 on oil change and timing belt replacement, things that on electric motors just don't exist.

In the second year, I traveled a lot more, even a bit more than the country average - 11511 km. This year was easier in regards to the amount spent on car gear and repairs, as everything worked fine and there were no surprise costs. It looked like this year might fare better in total?

But alas, it did not, as the fuel prices skyrocketed in the second half of the year. In January, a liter of fuel was $1.38, but only six months later it's standing at $2.10, a casual 50% increase. This of course offset all the car repair costs and made this year's total spent amount just a tad lower than last year's - $1970.

This is kinda interesting. I burned 833 liters of fuel, a 60% increase, and paid $0.20 more per liter on average, again spent even more of the time (69%) on open roads but it still came up to the same final amount. It just shows up how each year a different type of cost can come and bite you in the ass.

But the most depressing thing is this chart: 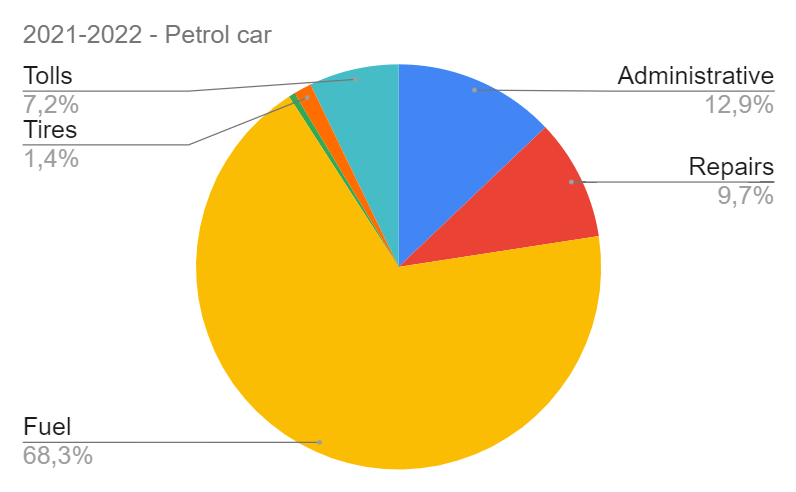 Onto the good stuff, I managed to reduce my fuel usage from 7.7 to 7.2 per 100 kilometers, which is nice. I also picked up some passengers through BlaBlaCar a few times and netted $100 in total, which makes the actual total a bit lower, but not enough to make you feel any better. 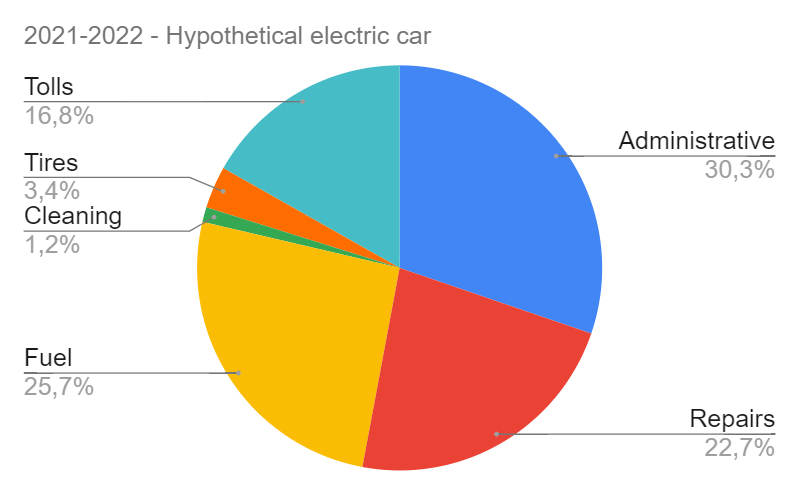 During those two years, when we factor in the price of the car itself, total costs come to $9985, which turns out to be around $0,50 per kilometer. Is this expensive? Well, around these parts Uber can cost you $0.80 - $1.00 per kilometer, so I would say it's pretty good that after only two years, a car gets cheaper than taking an Uber, while also being infinitely more flexible. And of course, the more you drive, the cheaper per kilometer it gets.

However, I mentioned that 67% of my driving happens on city-to-city trips, where instead of taxis you're usually traveling by buses. This segment is working surprisingly well in Croatia (buses are usually so on-point that people are using them as a faster and more reliable way of post office delivery) and it's pretty cheap as well - even with the recent price increases it still comes around $0.07 per kilometer.

So with my 33/67 urban/highway split, the total costs of traveling those 18211 km using only buses and taxis would be $6127, which is a 40% reduction. I think this is as good as it gets as a final verdict for this article, which could go like this:

The luxury of owning a car with an internal combustion engine costs 40% more than traveling the same distance using taxis and public transport.

I'm unable to estimate what would the numbers say for an electric car though - while we know that "fuel costs" are 6 times lower in EVs, the initial cost of a car might be a bit higher, so it really depends.

Now, is 40% too much or not? To me, gained comfort and flexibility of a personal car makes this an acceptable offer. Honestly, I was expecting a much bigger figure, more like a 100% increase, so this is not as bad.

But of course, if you're making below an average salary, or having an older car with higher upkeep, the numbers could get much worse for you. The sad state of affairs is that for a bunch of low-salary jobs you still need to have a car, and as calculated above, spend two monthly salaries just to keep the car running.

Before we end this adventure, let's check our pollution levels. Driving 18211 kilometers with a car rated at 145 grams of CO2 per kilometer, we end up with 2.5 metric tons of CO2 over those last two years. To make it more visual, we can say that every year, a car emits its own weight in CO2 into the atmosphere.

To compare it, your body emits 1kg of CO2 daily, 365 kg yearly, which is surprisingly only one-third of what the car does. But of course, your CO2 is the "acceptable" one, taken from the plants that took it from the atmosphere fairly recently, so you're only participating in the everyday carbon cycle. But the carbon from the fuel has been lying underground for hundreds of millions of years, and getting it up in the air in those amounts might not be the best thing.

Of course, sample size here is one, everything is based on my numbers, but I feel like it might be roughly correct for a bunch of similar scenarios. As they say - your mileage may vary.

So, for a budget car with an internal combustion engine:

I would be interested to see similar calculations for other countries, especially with some real-world data on EVs (including purchase costs, repairs, taxes, subsidies, etc) to get some rough answer to the question - are they worth it? Currently, it seems pretty sad that the average person here has to spend one-sixth of their yearly salary just to finance their car. It would be interesting to see how much EVs can do to change that.